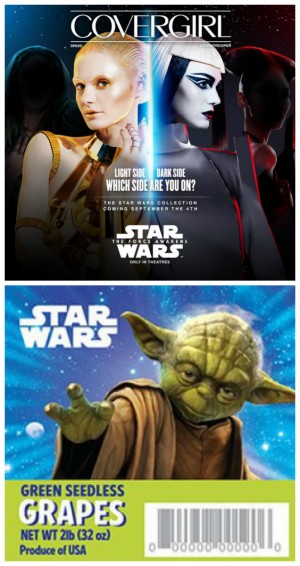 I’m so glad the new Star Wars: The Force Awakens is finally here! BECAUSE I AM SICK AND TIRED OF THE BARRAGE OF ADVERTISEMENTS AND INSANE MERCHANDISE! I think what finally put me over the edge was the Cover Girl Star Wars stand that I saw at the store and then the commercial later that week. I mean seriously, Disney’s marketing campaign is out of control. Plus the late night hosts won’t shut up about it. I know the movie comes out today, but I am already over it.

Also I feel like I should watch the other movies leading up to this one if I want to watch the new movie and if I remember right Episode 2 was so boring that I never even saw Episode 3. Plus I don’t remember Episode 6 being anything special, but that was a long time ago. I’m almost sure that my opinion about this won’t be popular, but that could just be Disney brain washing me into thinking that everyone on planet earth loves Star Wars and will be going to the theater today.

I was actually looking forward to watching Star Wars: The Force Awakens. Not so much because it’s Star Wars, but because the puppetry and special effects should be awesome. Plus it’s pretty cool that they brought back a lot of the original cast to do a proper squeal. I do have to wonder if anyone from the original cast will actually be in Episode 8, but for now they appear to have everything they would need to make a great movie. Either way, I don’t see myself going to the theater without a girlfriend and I definitely don’t see that in my near future. 😛